by Robbo Bennetts
first published in Journeys, the professional journal of the Victorian Outdoor Education Association, Volume 7, No 3, October 2002

Some years ago, I enrolled in a bushwalking course, thinking that the course was about appreciating the bush. During an initial assessment walk in Mt Samaria State Forest, midway through a navigation exercise, I noticed a common bird orchid in flower. I pointed it out to my leader, "Roy". Roy was momentarily fascinated, but as he spun away to check his bearings, the sole of his size 12 walking boot unwittingly screwed the orchid into the ground, as if he was stubbing out a cigarette butt. 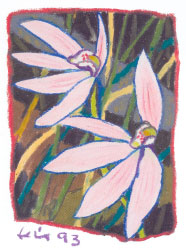 Here, people kill orchids. Overseas, people have killed for orchids. Historically, the international trade in protected species has resembled the drug trade. Single lady slipper orchids have sold for up to $US20,000 each. Forests have been ravaged. Hundreds of thousands of orchids, many of them endangered, have been smuggled all over the world. This business has flourished since the first half of the nineteenth century and the invention of glasshouses. Polite society hired professional orchid hunters (a la Indiana Jones) to risk life and limb in the jungles of Brazil, Burma or Madagascar to bring back exciting new specimens.

Orchids are one of the few living things that, notionally at least, can live forever. Orchidaceae are the biggest and one of the most diverse of the flowering plant families. It is said they are the highest evolved plant. 60,000 known species - some 368 in Victoria - are found around the world, in most climatic zones.

Most of our native orchids - at least the terrestrial orchids of southern Australia - are not as grandly voluptuous as exotic species. Many are indeed brightly coloured. Others are difficult to see (designed perhaps to be noticed only by a single insect species). Most are subtle and delicate. Yet, like their overseas cousins, they are the sorcerers of the plant kingdom. They are masters of disguise. They cast spells and transform themselves into tiny spacemen, flying ducks, spiders, mosquitoes. Bird orchids look just like baby birds with open beaks demanding a feed. Some orchids have helmets, some beards. One (corybas dilatatus), from above looks like rabbit poop. Some only flower when the sunshine touches them. Or after a fire. Others flower underground. Their shape, colour or scent seduce unsuspecting insects. Just as they seduce orchid lovers.

Until recently, there were countless millions of orchids in grassland and woodland stretching across this continent. Those tracts of undisturbed bush where orchids are most favoured, however, have dramatically shrunk. Many species are now rare or endangered. A precious few can still be found in remnant patches of "bush" around outer Melbourne, such as some roadside verges or railway reserves. But orchids are fragile and critically vulnerable to clearing, grazing and urban sprawl. They are eaten by rabbits. They are choked by pest plants. They are dug up or picked by admirers.

I believe that it is incumbent upon us as outdoor educators to educate ourselves about Australia's indigenous flora - especially orchids - in order to be able to more effectively educate others. We need to develop some basic identification skills and, hopefully, some passion to share. We need to avoid activities like orienteering, off-track walking and camping in wildflower-rich areas, particularly between July and December.

Otherwise, posterity may judge us complicit in the continued destruction of the gentlest of all God's creatures, perhaps without even realising.

Robbo Bennetts and his partner Deb Oliver have identified 28 different species of orchids at their bush property home in St Andrews, including a very rare arachnorchis believed to be the ancestral species of other spider orchids.