Flying to work the other day, looking down on the shagpile woodland and vast sleeping waterways of Kakadu, I thought ... the cockpit of a Cessna 404 is a really tiny space. There were so many buttons, I didn't know which to press first. Luckily, I was only the co-pilot. The pilot, Brendon, pointed down and said, "That's the Mary River. In the Mary, there are 300 crocodiles every kilometre - more than anywhere else." 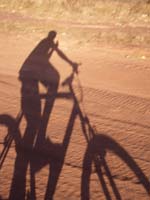 After an 80 minute flight from Darwin, we touched down at Ramingining, a dusty little community deep inside Arnhem Land. Between jobs, I had accepted an offer to emergency teach at Ramingining School for two weeks. I was based in the high school, teaching literacy to older kids and SOSE to younger kids. I shared a new, furnished department house with two other teachers. We drove to and from work each day in a department troopie, (something that appeared to particularly irritate all the town dogs).

Ramingining is a very traditional community. 16 indigenous languages are spoken here. The kids speak Yolngu Matha amongst themselves. None speak English out of school. Apparently no-one even speaks Kriol (pidgin with rules). One of the "old hands" at the school worked for 18 months as an overland truck driver in east Africa. He says that this is the most foreign country he has ever visited. Like anywhere, there are problems, but Ramo presents as a functional community. Here, indigenous culture appears strong. Children seem to respect the elders, and it feels as safe as anywhere else in Australia.

Being winter, the temperature slowly rose to around 30° each day, but it didn’t really warm up until after lunch, and even then, there was usually a delicious breeze. My favourite place to sit at lunchtime was outside the staffroom under the shade of tropical no-idea trees. (I checked – that’s what it’s called.) There I luxuriated. There I savoured the knowledge that -but for Karma -I could have been freezing in some breezeway in some southern high-school-cumwind-tunnel on the edge of a wind-swept plain, ordering a huddle of waifish students to pick up their lunch wrappers before they (students and wrappers) blew away.

Not only is the weather wonderful, but Ramingining School is doing wonderful things. It feeds the kids, and others, a healthy breakfast, play lunch and lunch. It provides a bus service to pick up and drop off kids from the out-stations. It runs a Yolngu Matha language program. It provides real jobs for many local people, and works with the community. The staff are young and enthusiastic, and loving it here.

In the first two weeks of term, there were not many kids around. One time, only one of my five Year 12s came to class, so the two of us walked over to a community meeting about petrol sniffing. (Four boys who sniff petrol had been sent away.) Another time, no-one came. Generally, I had five or six Year 10s (out of the 30 students on the roll) and about ten Year 8s.

School had just resumed after the holidays and many families hadn’t yet returned from the Darwin Show. In any case, it appeared that school was third or fourth priority for many of the kids. First came cultural obligations. Second, perhaps, hunting or gathering bush tucker. Third, hanging out with the fam. It made sense to me.

There was a lot going on culturally. I went to an open ceremony one night, and watched boys thumping the ground with their bare feet, leaves strapped to lower legs. They were rehearsing for an all-day ceremony, which was to take place the day after I flew out. The leaves would be lit. Don’t worry, I was told, they’ll have fire extinguishers.

My Year 12 students had been studying the February 7 bushfires. Serendipitously (I guess), I had slides in my laptop of the devastation out my way. Many of my neighbours’ houses burned. Many died. I was deeply touched when I discovered that aboriginal people from this community had raised thousands of dollars for the bushfire appeal.

Most of the older kids are painfully shy, and struggle terribly to write anything, but my sense is that they are sharp; they have emotional intelligence. Moreover, every kid I taught was polite and accepting, even though many strange Balandas (white people) must flash in and out of their lives.

Health educators from Darwin flew in to teach the kids about scabies. They had two microscopes that were hooked up to a computer screen in order to examine bacteria (and bits of food and plaque) in the doctor's spittle. One of the Year 10 girls conveniently produced a nit for examination. They do it all the time, I was told later. 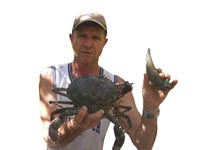 The first Friday of term was another holiday. A few of us teachers went mud-crabbing. (You need permission from traditional owners everywhere you go.) The best thing about mud-crabbing – apart from the culinary delights – is the fact that it is even more difficult for saltwater crocodiles than us to negotiate the incredible tangle of mangrove roots. I was attacked by sand flies, however, receiving hundreds of bites to my arms and legs because I stubbornly refused to use insect repellent. Later, my buddy caught a 58 centimetre barramundi. That night, we feasted like hedge fund managers.

On the middle Saturday, I came out of a 30-year retirement and played in a footy game on the bare red dirt oval. I got a few kicks across the backline: a fancy left foot toe-poke to a team-mate, a long bomb deep into our forward line. My direct opponent wasn't too happy about it. Before I picked him up, he had kicked two goals. Now he struggled to get his hands on the ball. When I was otherwise distracted, he ran and planted his shoulder right in the middle of my back. He did this several times. Then, to my amazement, he squatted down behind me, using my shadow to hide from the sun. He looked up at me with a typically cheeky ten-year-old grin. 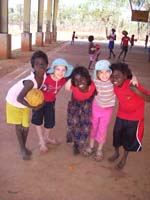 Whether it was football, or basketball or ceremonies, inclusion was the rule. Girls and boys, initiated men and six-yearolds, Yolgnu and Balanda may have had different roles, but they were all included. Another ten-year-old – a blond Balanda and coincidentally a neighbour of mine down South – was initiated alongside the Yolgnu boys in the big ceremony. Anyone who comes from other parts of Australia to Ramo soon find themselves adopted by local families. The mutual obligation that flows from these family connections is the cement that holds such communities together.

Flying home from work the other day, looking down on the shagpile woodland and vast sleeping waterways of Kakadu, I thought ... emergency teaching can be agonising; it can be humiliating; it can be dead boring, but just sometimes, it can be fun.