The sign at Matopos National Park aptly summed it up - the dangers and frustrations of travelling in Africa. Not only can you be killed by things you can see and things you can't see, but expect to be inconvenienced by whatever doesn't kill you.

Zimbabwe 1998. My partner and I had returned to my mother's birthplace to see my two nonagenarian aunts before they died. Arriving at Harare 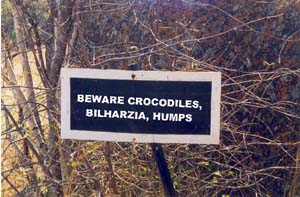 airport, Africa smelled just the same. The night air was warm, and thick with diesel fumes and smoke from burning mealie stubble. Black figures melted languidly into the shadows. Welcome to Africa.

Soon after our arrival, six of us crammed front and back into a canopied pick-up for the long, uncomfortable trip to Hippo Pools Wilderness Lodge. Iain and Sue Jarvis created this bush retreat without electricity, telephones or any town within drumbeat. On the edge of Umfurudze National Park, the retreat overlooks the Mazowe River. There is nothing here but space and tranquillity and bush teeming with wildlife. This is Africa.

Each morning we watched African girls from the tribal trust land opposite carrying buckets of water up the river bank. Just prior to our visit, a crocodile lunged out of the murky water at an unwary girl, clamping on to the bucket she held. Refusing to give up the bucket, she was pulled into the water to her death. She was the third local victim of croc attack in a matter of weeks. Beware crocodiles.

They may look cute, but hippopotamuses, not crocodiles, kill more people than any other wild animal in Africa. They yawn to warn. Their massive canine tusks can snap a crocodile in two. In 1996 a river guide on the Zambezi had an arm famously ripped off by a hippo breeching from below. Now, with Iain guiding us downstream, we paddled our canoes breathlessly within 30 metres of a submerge of hippos. "Watch out for Notchy," said Iain, "She is very cheeky indeed." 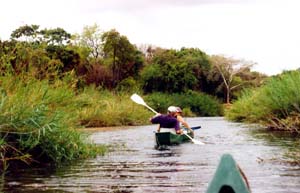 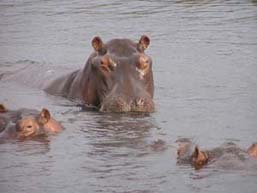 It is said that most wild animal attacks on humans only happen when those humans have a lapse of judgement. A Harare newspaper reported that a man in Kenya snuck up on a wild elephant in order to milk her. Amazingly, he managed to squeeze out a litre of milk before she realised it was not her calf pulling on her teat. Naturally, she became very irate and charged him. The man ran and scampered up the nearest, rather flimsy tree - only to watch in horror as the elephant wrapped her trunk around the tree trunk and ripped it out of the ground. Then, as he grimly held on, she swung the tree around and crashed it down again. He was only saved when a group of village women who heard the din ran up screaming. And yes, he did spill the milk. Only in Africa.

But Africa is even more dangerous for wild animals than it is for humans. In South Africa, for example, game is either bred for "canned" hunting or lured out of national parks adjacent to privately-owned ranches. Great white incontinent hunters are flown in and wheeled out to shoot sedated trophy animals for a fee. Beware the king of the concrete jungle, the almighty dollar.

When the economy is falling apart and people are forced to eat tree roots, poaching wildlife is sometimes the only way for rural Africans to put meat on the table. We woke from our peaceful slumber the day after our canoe trip to discover that Iain and Sue had been up all night fighting a bushfire which threatened the lodge. It was deliberately lit by a local villager angry at the confiscation of traps illegally set inside the park.

The topic of crime dominates the pool-side conversation of white Zimbabweans. Everyone has good crime stories. South African-style car-jackings are becoming daily occurrences. Single women are followed home and trapped as they get out of their car to unlock their front gate. The inventiveness of thieves is legendary. If you are lucky, your watchdog will be etherised. If you are unlucky, it will be stolen. Steering locks don't stop car thieves. Thieves simply remove the steering column and replace it with another that is identical. Rapacity is the father of invention. 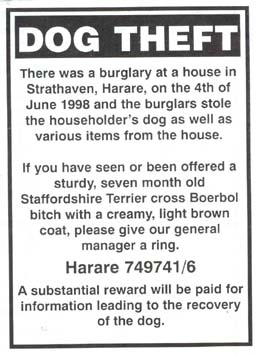 A couple of elderly British tourists fuelled up on the outskirts of Harare, before heading to Kariba. (Remember, there is no self-serve in countries where labour is so cheap.) A kilometre down the road they pulled over with a flat tyre. At the same moment, a Renault full of young men pulled up opposite, as if on cue. Next thing the Renault was accelerating away, half-dragging the elderly but determined Briton, the occupants punching and kicking him as he leaned into the back seat of the car, trying to recover his wallet. Beware innocent-seeming exchanges at the gas station.

Whites and blacks living in the more elegant suburbs have developed a siege mentality. The security industry is riding on the crest of a crime wave. Many of its uniformed employees are former freedom fighters. There are all kinds of whizzbang security products now on the market, like a South African device ("The Blaster") which shoots out flames from under the driver's door in the event of an unwelcome approach to your car.

Roads are dangerous in more ways than one in Zimbabwe. A BMW was set on fire in central Harare and its owner mobbed after he accidentally hit an unfortunate pedestrian. Army vehicles apparently are under orders not to give way at intersections. Presidential entourages reputedly open fire on members of the general public without provocation. A spate of government ministers have curiously died in separate road accidents, all of which seemed to have been caused by a mysterious black dog. 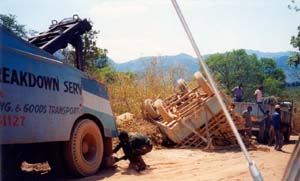 The police regularly pull over drivers for petty infringements, apparently as a way of supplementing their wages. Reckless driving, by contrast, seems to be widely admired, if not mandatory, and usually goes unpunished.

It was a relief to tumble into our first class sleeper at Harare Station. Travelling by train in Zim is a memorable experience. We savoured every thud and jolt of the slow overnighter to Bulawayo. Unlike travelling by road, it is very safe . . . unless of course an elephant wanders on to the track. Or you are a baby tiny enough to be flushed down toilets that empty directly below.

Luckily, presidents don't hijack trains like they hijack planes. International travellers have been stranded more than once after the presidential entourage has arrived at Harare Airport unannounced, and commandeered an Air Zimbabwe jet, much to the irritation of all concerned. But hey, this is Africa, and Africa always wins.

Checking in at Victoria Falls, I decided that rafting the Zambezi again was way too dangerous. The Zambezi is a big volume river with frightening Grade 5 and 6 rapids. Stories of misadventure on the river abound. Foot entrapment. Crocodiles. (Beware crocodiles.) Getting sucked into the Devil's Toilet Bowl. A river guide informed me nonchalantly that there had been a rafting fatality at every rapid below the Falls from No. 4 to No. 25. There had been a fatality on a 5-day trip just before we arrived. A teenage girl. Family friend of trip leader. Foot entrapment.

So instead I joined some pensive Poms and punted down the Zambezi on a boogie board. We had an escort raft to pull us out after each rapid (on account of the crocodiles). We had guides, also on boogie boards, who demonstrated just how easy it is to slip down feet-first into the great chutes of smooth water and surf the big waves. Each time I tried pathetically to surf a wave, I swallowed gallons of upstream effluent and was violently spat out into the current.

Finally, on the very last rapid of the day, I somehow managed to hold fast while millions of litres of water drained under me, sweeping down from a wall of sheer liquid three metres above. It was simply awesome. There was I, in the heart of the raging torrent, still as a photograph. There was my guide, on a rock 30 metres away, capturing the moment with a camera. Later, to my great shock, I discovered the camera had no film. Africa wins again. (For the full story, click here.)

Victoria Falls, they say, is the only part of Zimbabwe with an altitude low enough for malarial mosquitoes. Malaria has special significance for me. It killed my grandfather. Over a century ago, he trekked 2,000km from the Kimberley diamond mines in South Africa to Salisbury, and then paddled down the Pungwe River in a dug-out canoe all the way to the Mozambican coast. All this was long before modern science developed anti-malarials. He died at the age of 59. The threat of diseases in Zimbabwe like malaria, cholera and bilharzia just go to show that humans are not at the top of the food chain. We are just part of the food cycle.

We caught a Blue Arrow coach back to Harare. In air-conditioned comfort we looked out and saw proudly maintained mud-and-thatched huts set in amongst granite tors, donkey carts, an overturned truck and some police trying to push-start their battered patrol car. Once in Harare, my cousin's technician, Justin, guided us safely around the city's traps to the sights. But Justin himself had lost 19 family members to the AIDS virus, including his wife. Her death left his five children motherless. (Editor's note: Justin also died from AIDS.)

Twenty per cent of adults in the country are HIV-positive. One gauge of the exponential increase of the virus is the way names just keep dropping off company payrolls. Another sign is the way paupers' graves have sprouted all over. Nyangas, the traditional medicine men, reportedly advise those who are HIV-positive that the disease can be cured by having sex with virgins or white women. 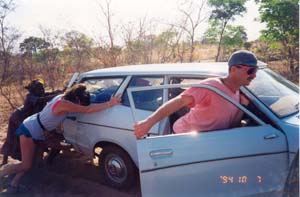 Paradoxically perhaps, in 1998, Zimbabwe is still one of the safest countries in Africa to visit. Its people are open and welcoming. The children are gorgeous. The culture is magical. The landscape and the creatures found within it are the stuff of memories that you will carry to your grave. But beware Africa. Africa always wins. If crocodiles or bilharzia don't get you, the humps will.