Gagging down the Tully

There are ten thousand unemployed comedians in Australia and every raft guide in Far North Queensland is stealing their lines. Not only that, but booking agents are trying to get in on the act as well. “Okay, so that's two tickets for one day on the Tully with Raging Blunder. You're lucky, we only charge one way on the bus. All I need is a 20 percent deposit.” 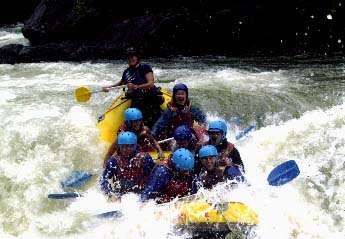 Next morning, after discoing all night, we board the coach. My eyes feel like pee holes in the snow and my mouth feels like the bottom of a cocky's cage. The coach seems about half a mile long and we are right at the back. Outside, the Sunshine State is damp and dull. Streaks of rain slide down the bus window as we pull onto the highway.

“See that sunshine?” a voice leaps out at us through a microphone. “That's liquid sunshine.” Barney is our guide and master of ceremony and very seventies in a Willie Nelson kind of way. He is the warm up man. We are the captive audience. We are captive, but tough. Half a mile of half-shut eyes regard him silently. It is the stand-up comic's nightmare.

“I didn't get it either,” says Barney. Then, “See those trees with the plastic bags on them? Some people think they're banana trees. They're actually plastic bag trees. Yeah. That's where plastic bags come from.” More silence. (Well, it is a hard act to follow.) “Okay, I know it's not funny, but it's not my material. Okay, now I want to introduce you to our driver, Bill. It's no secret that Bill has a serious drug problem. Oh, sorry mate, it is a secret. Have you taken your medication today, Bill?” There is a solitary chuckle. “That's okay. Yeah, just laugh one at a time.”

“Now,” Barney continues, “I'm sending around some indemnity forms. I want you to take one each. This is an examination, so no talking and no copying. Don't worry about reading the fine print. That just says we accept absolutely no liability whatsoever for any bad jokes you might hear. Yeah. Now I want to introduce you to Sosumi, our Japanese interpreter. HI KI YI! HUJJA KOJJA WOJJA!” Barney screams. Sosumi attempts to translate Barney's gags to a platoon of incredulous Japanese punters.

We watch a video about safety on the river. “Yeah,” says Barney, “There are two classes of people on the river — paddlers and swimmers. If you tip out, you are a swimmer. But don't worry, we've got safety people out there. Just assume the whitewater float position, hold up your credit card, and we'll throw you a line. If someone else in your boat tips out, pull 'em back in. Just grab their life jackets by the shoulders. If they're a Kiwi, use the two finger method — one finger up each nostril, and pull 'em back in. Hey, what's the difference between a Kiwi and a kayak? Kiwis don't tip. Are there any Kiwis on board? Welcome to the West Island. No problem.”

Barney was on a roll now. “People often ask, ‘Are there crocodiles out there?' Well, I guarantee you will not see a crocodile on the Tully. They always swim up behind you. It's a fallacy that you have to be able to outswim a croc. You only have to be able to outswim one other swimmer. And you can always slow him down. A knee to the groin and elbow to the head works pretty well.

“Are there any Americans on board? When you get off the bus, give me your traveller's cheques and Rolex watches. They'll be perfectly safe with me. What'd Groucho Marx say? No one ever went broke underestimating the intelligence of the American public.

“Are there any Aussies on board? Hey, how good is Skippy? Did you see the episode where he repaired the carburetor? Are there any Victorians here? We'll need to check your passports and visas. Ah, Mexicans, I dunno,” says Barney, shaking his head.

“Are there any dentists?” No hands go up. “No, I wouldn't admit it either.” We drive through Tully township. Barney points out millionaires he knows. He offers to organise introductions at the ho-down at the RSL hall on Saturday night. Then he offers us discounted plots at the local cemetery, just in case this trip doesn't work out. Later, he points out the experimental white cows that MacChickenburgers are made from.

Before we know it, we are squeezing into yellow life jackets (yellow being crocodile-repellent). Then we are slipping down the Tully, sucked into rapids that buck and kick. Their names — like Double D Cup and Dogs Balls — reflect dry river humour. We watch Ulysses butterflies and Birdwings dancing in the shadows. Guides showcase their skill in drenching unsuspecting punters on other rafts. (More dry river humour.) It is a pretty river and a lot of fun to paddle. Apparel wet and appetites whet, we eat lunch at a camp in the middle of rainforest where scrub turkeys scratch about, taking little notice of us.

All too soon we have paddled twenty kilometres and are back on the coach. We watch video footage of one guide after another falling unceremoniously out of their rafts. We see them being jerked backwards, hurled through the air, headbutting rocks, swimming desperately to catch up with the punters. One moment they are sitting pretty on their rafts grinning at the camera. The next moment they are pummelling the water in disgust because their fall from grace has just been caught on film, and now they know they will have to shout the bar.

“Well, team,” says Barney as Cairns' sparkling nightscape of come into view, “I've had some pretty ordinary groups in my time. You should have seen the losers I had this morning. But I can honestly say you are the most recent group I have ever had.”