by Robbo Bennetts
first published in the Age under the title "A surfer who’s slow to catch on", 24 March 2000

Here I am sitting awkwardly on a plank out the back at Torquay surf beach. I am planning my 50th birthday party while I wait for a set. Surprisingly for a Sunday, when the waves are clean and peaking at 4 to 5 feet, there are only a few of us long-boarders out here.

Surf is a great leveller. You never know who you will meet out the back. John Thwaites. Tim Winton. Michael Klim. But today I am sharing the waves with a motor mouth whose celebrity escapes me. 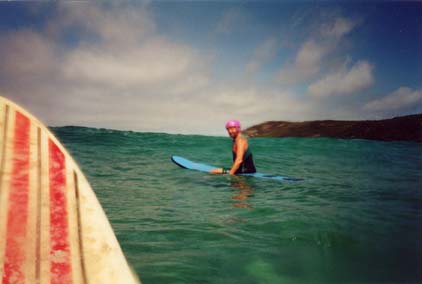 A set comes. I watch as my compadre catches the first wave with ease. He surfs aggressively, standing tall, master of the moment. I try to catch the next wave, but I miss it, only succeeding in getting washed 30 metres closer to shore. I hate that. Now I have to paddle out again. I count the strokes.

Before the next set arrives he has already rejoined me, despite having just ridden over 100 metres to the shore. I hear the set coming before I see it. The roar of the waves triggers fear and excitement. Again, I let him take the first wave, knowing there is another behind it.

This time I catch my wave. That is, it catches me, thrusting my board shoreward with alarming speed. I am forced to body-board until I can stand up. But finally I am up, and somehow manage to stay up until the wave loses its power in deeper water halfway to the shore.

Still I am happy. Each day I surf, I improve about 3 per cent. I am no longer an embarrassment to myself or my family. Earlier in the week, for the first time, I surfed Bells. I got up for a "dawnie" and caught waves as a yellow sun rose up gloriously over the ocean. I felt totally attuned.

I have wondered why it took me nearly 50 years to become addicted to surfing. I can only think I was turned off as a teenager by the Americanised drop-out short-board surfie culture of the sixties. But now - with the return of long boards - grace and elegance and oneness with nature have replaced the Yo-man-radical-dude adrenalin rush of short boards. Let’s face it, short boards are for kids. Long boards are for men.

And long boards are a lot easier to learn to surf on when you are experiencing a mid-life crisis. Not that it hasn’t been frustrating. At least as frustrating, I would say, as learning to ski at 40, or learning to roller-blade at 45. The surf shop selling me a board a foot too short didn’t help. But those are the breaks.

I let my still garrulous compadre catch the first wave of each set, and I wait for the next. This is the pattern for about half an hour. Then I experience a lapse of judgement. He is about 40 metres wide of me, a little further out. There is plenty of room, I think. I turn my board and paddle hard. I am on the wave, gripping the rails tight.

The next thing I know the compadre is carving right across in front of me. "Don’t f---in mind me!" he jabbers. "Don’t mind that it’s my f---in wave, and I got on f---in first!" I am shocked, and I pull out in order to avoid a collision.

When he paddles back alongside me a few minutes later, I contemplate leaping at him from my board and engaging him in a gargantuan fight to the death. Instead, I ask, "How long have you been surfing, mate?"

"35 years," he replies with more than a hint of hubris.

"Yeah well, when I had driven a car for 35 days, I wouldn’t have f---in driven like that!" The analogy confuses me, and I have no comeback. Later on the beach, he says, "If you wanna keep surfing, you had better make sure you learn to look."

35 years, I think, and you still miss the point.

This article is dedicated to Ken Harley, surfer, saxophonist and dinky di good guy. Ken passed away after a long illness in 2005. He loved this article when it was first published. It was an honour to know you, Ken.

Postscript: The day after this article was published, it was reported that former world champion surfer Nat Young was badly beaten at his local break during a surf rage incident.