What old teachers do before they lie down and die

What old teachers do before they lie down and die

by Robbo Bennetts
first published First published in the Age, 19 May 2014 under the title of "Outback teaching, a tough road to travel."

Tired. Burnt out, really. Old school. High school. A chalker and talker. Not an interactive whiteboarder. I was like a 1985 VK Holden Commodore, no longer stylish, no longer able to compete with some cute, fun and versatile late-model Toyota Yaris or new, small, sexy Audi. Which is why I hauled my sorry chassis up to the Top End last year. One last ride before being towed to the paddock.

I had a contract as a roving teacher, supporting specialist literacy teachers in town schools and out in communities, working - someone had neglected to tell me - mostly with early years. For the record, I have never understood, or related to little vegemites. I didn't even speak to my own kids until they had left home.

In big school, I never had to micro-manage hands, mouths, noses, shoelaces, stars and stickers or contagious diseases like busting to go to the toilet. In big school, I was not bombarded by "Sir, Sir, Sir". Didn't Oscar Wilde say childhood is a form of insanity that some of us grow out of? 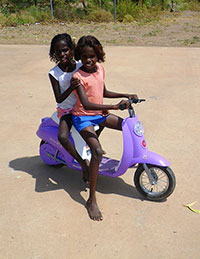 But worse, some remote communities are so chaotic that many kids rarely go to school. Many are not socialised at all. Those at school are often dog-tired from being up all hours. There is neglect and abuse and there are all kinds of health issues. Problems spill from the community into the school and back into the community.

Teaching remote is tough. Teachers are isolated and have little authority. And this takes its toll. One class I met had had 13 different teachers in the first half of the year.

Teaching remote would be serious if it wasn't so funny. At one hot dusty unloved place, my class was still learning how to line up outside the door. (They hadn't yet learnt how to come in and sit on the mat.) It was like trying to teach chooks to line dance.

I soon realised I had to take them out and do sport. The school's fence had been dismantled and the playing area kind of merged with a string of pot-holes that resembled a road. The game I chose is where the teacher says, "Go touch something round, or something yellow or something made of plastic, and then run back to base".

Everything seemed to be going well. These kids were programmed to run around like dervishes. I had barely noticed a black dog sprawled beneath a slide nearby. Ill-advisedly perhaps, I said, "Something black". The kids manically raced towards the dog. The hapless hound took fright and scampered down the road. The kids gave chase and had vanished into a cloud of dust before I had the presence of mind to blow my whistle and call them back. 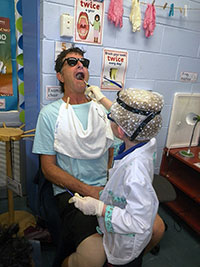 A few weeks later, I travelled with a somewhat mischievous colleague to another community. The kids were engrossed in something called "play-based learning". They were playing with blocks, Lego, tea sets and play dough.

My colleague wickedly tricked me into playing patient to a little blue-eyed monster who was playing dentist! This so-called dentist had a singularity of purpose that was unnerving. He certainly looked the part with his white dustcoat, his safety glasses and his menacing tooth pliers.

Well, he probed and poked and prodded with the pliers while I gagged in the chair. Too afraid to leap up and run away, I felt like the unwitting subject of a Milgram experiment about obedience to authority. Don't worry, my colleague assured me, rather too cutely, the instruments are sterile.

Back in town, I found myself staring down at a Grade 1/2 class outside their classroom after muster. One little girl - Angelina - squeezed my hand tightly. When everyone else sat on the mat, Angelina pulled up a chair next to mine. She told me who wasn't allowed to sit together, who wasn't listening, who was playing with slinkies, who had been promised a star if they kept their hands to themselves. 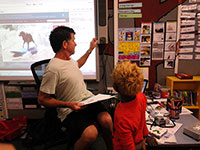 Then it was time for maths. The Grade 1s and Grade 2s had separate maths sheets. I knew I couldn't teach both groups at the same time. My mind stalled. How do real primary teachers manage these situations?

Through my whole teaching career I have always been able to conjure some absurd solution to a problem. I gave Angelina the Grade 1 work and asked her to teach all the Grade 1s at the back of the classroom while I taught the Grade 2s down the front.

Whenever I checked, this little school ma'am's group was sitting with legs crossed, hands on laps, lips zipped, looking and listening. She was writing on a little portable whiteboard. There was no play-based learning here, but it was a lovely image. Later, Angelina complained that no one had paid any attention. Later yet, I discovered that her mother had only recently died from cancer.

Just before Christmas, I had to cover a teacher who had vamoosed from his bush school without even saying goodbye. They say kids get the teachers they deserve. These kids were out of control, but I thought they deserved better.

I began to change my mind during the first session, which would be best described as a sustained riot. Straight after smoko, fisticuffs broke out in the breezeway. Two unevenly matched boys were taking big swipes at each other. In all my years in high schools, I had only ever had to intervene in a few fights. But I knew high school strategies would have no effect on these kids.

Again, my mind stalled. Again another absurd solution popped into my head. I remembered Scottish psychiatrist R. D. Laing once famously taking off all his clothes and mimicking a naked woman with schizophrenia who was rocking back and forth. The outcome, apparently, was very affirming. I knew immediately what I had to do!

I jumped in front of the smaller boy. I put up my dukes, and yelled, "Pick on your own size!" I knew exactly what I was doing. I had sparred with a Golden Gloves winner back in the 1960s. I channelled my inner Rocky Balboa as we danced around each other. All the other kids screamed in delight at my arthritic attempts to parry each savage little blow. Before long, we were all laughing. After that, the whole class was like play dough in my hands. 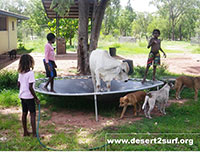 Despite such small victories, I had a growing sense that I was already past my use-by date. It wasn't just the rusty duco. The motor had lost compression. I felt guilty that I could not commit serious time to making a difference to the lives of the kids I had encountered.

At least, I knew there were plenty of other teachers and assistant teachers, much cleverer and more energetic than me, who have made the commitment.

Now, I have nothing left but memories. The oldest of these are from a different era. Chalk dust. Gestetners. Roneo machines. Hand-written reports. Listening to thwacks next door as the deputy principal caned a recalcitrant student. Plenty of Commodores in the school car park.

First published in The Age, 19 May 2014 under the title of "Outback teaching, a tough road to travel." 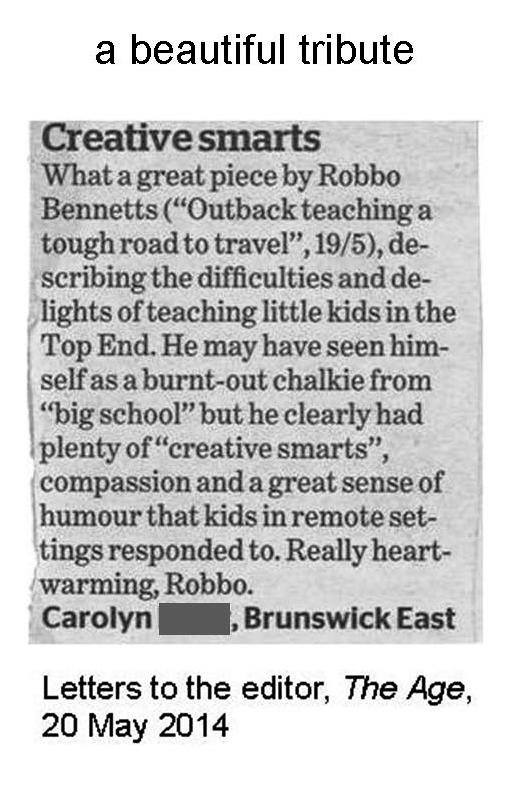